The Mitre is the oldest pub in Buckingham.

The Mitre is the oldest pub in Buckingham.

Give us a call today.

Drop us a quick email.

Happy? Leave us a review.

The Mitre, Buckingham is steeped in history!

Known to be the oldest pub in Buckingham, The Mitre is a friendly local of a type that’s all too uncommon in the 21st Century. Beams, an open fire, and five real ales served directly from the cellar all contribute to a classic pub experience but aided by our new bar, revamped cellar and new pipework we can promise ales in the best condition and at the right temperature. We are in the CAMRA Good Beer Guide for 2016, 2017, 2018, 2019, 2020 and 2021 and have been named Milton Keynes and North Bucks CAMRA Pub of the Year in 2015.

One of the earliest references to The Mitre is on John Speed’s map of Buckingham from 1610, where it is shown next to Mitre Cottage on the corner of Bonehill Lane (renamed Mitre Street, after the pub, only in the late 19th century) and Hunter Street. The cottage itself dates from much earlier, some time around 1420. The Mitre is also shown on a Rutgers map of 1661. There are also records of the pub attracting rents for the Lord of the Manor of Gawcott and Lenborough, including a Quit Rent that was to exempt them from military service of 8d per annum.

There were at least two other public houses in this area of Buckingham, which was known as Prebend End. This signifies that the area had a priest but not a church, the income for the priest coming from the surrounding area’s farms and other businesses. The area derived some income from the pilgrimages made to St Rumbold’s Well, a holy site with a spring said to have spontaneously generated on the death of the local Saint. This can be found by following the Railway Walk from the pub westwards towards the Tingewick Road.

The pub was originally thatched – fragments of thatch were found in 2012 during renovations to the walls on the top floor. It would have stood as a detached building until it was extended sometime in the late 17th or early 18th century from the centre outwards, with the addition of the stables to the left and the small lounge with fireplace, which butts directly against Mitre Cottage with only a stud wall between them. At the same time the upper floors were also extended, the roof tiled, and the accommodation carried into the loft to make three bedrooms. A new brick frontage was added at the same time. The stables floor was uncovered in 2015, discovered to be of blue brick construction with a central runnel. The hayloft door outline and window are still visible from the ground.

In the Victoria County History of Buckinghamshire, The Mitre is described as ‘a half timber and brick house of two stories and attic, dating from the seventeenth century’.

There is an extensive entry in ‘Buckingham the Loyal and Ancient Borough’ by Douglas J. Elliot, which is now available for download.

As would have been common at the time, after renovation in the late 18th century the bar was laid out with multiple rooms with doors between them, and a central off-sales counter. The bar was further forward at this time, with the beer being served using jugs from barrels on stillages in the room immediately behind the bar (which are still present). This means of course that the beer would have been much warmer than we expect today. In the 1970s the cellar was excavated and the barrels moved downstairs, making cooling and engine dispensing possible. At the same time, the bar was moved back to its previous position before we then installed the new bar nearer to it’s original position, which you will see today. The fireplace in the lounge came from No. 7 Mitre Street and was installed in 2009. Before then it held a gas fire with a 1960’s surround.

The garden and patio areas were laid out in 2007-8, having been previously divided into two as public and private areas. This was to cater for the smoking ban that came into force in July 2007. The windows to the front of the property were extensively renovated and in some cases replaced like-for-like in 2014.

We’ve compiled a list below of all the different Landlords and Owners of The Mitre. If you have any additional information that would enhance our list, we’d be very grateful to receive it! 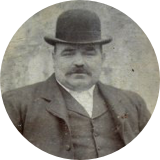 The other two public houses in Mitre Street were The Cross Keys and The Britannia. The Cross Keys, opposite on the corner of Hunter Street and Lenborough Road, closed in the early 1930s and parts of it live on as two cottages. 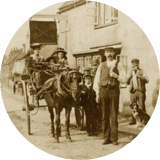 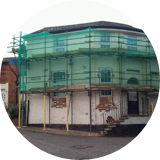